This year, March 26-30 marks the 16th annual LGBT Health Awareness Week. This five-day observance aims to bring awareness to health disparities and discrimination that affect the lesbian, gay, bisexual, and transgender (LGBT) community. According to the National Coalition for LGBT Health, this year’s theme is “OUTfront for LGBT Health.” The Coalition noted that this theme is “based on feedback from a survey of Coalition members, who identified access and health equity as a key issue in LGBT Healthcare.” So, what should doctors and other healthcare professionals do to celebrate this week? Below, we’ll provide a history of LGBT Health Awareness Week and its goals, as well as provide suggestions for promoting LGBT health.

It’s no surprise that individuals within the LGBT community face discrimination in many areas of their lives, including in healthcare. People within the LGBT community are often discriminated against when it comes to insurance coverage. On their website, the National LGBTQ Task Force mentions that LGBT individuals are twice as likely to be uninsured than the rest of the population. “22 percent of gay and lesbian respondents reported having no insurance, compared to only 12 percent of heterosexual adults. Rates of lack of insurance are even higher for bisexual and transgender people,” the Task Force notes. As a result, these individuals tend to delay or avoid necessary medical care. Sadly, insurance isn’t the only problem. A survey conducted by the Task Force found that nearly 30 percent of participants reported that they have experienced violence or harassment in a healthcare setting.

The goals of LGBT Health Awareness Week are to increase knowledge of the health needs of LGBT individuals, eliminate health disparities, and increase availability and quality of healthcare. However, each year the Coalition chooses their top goals to focus on during the week. This year, the goals are the following, according to their website:

So, what should doctors and healthcare facilities do?

No matter where you work, it’s important to foster a healthy, LGBT-friendly environment in your healthcare setting. The American Medical Association offers a few great pointers on how to create an LGBTQ-friendly practice: 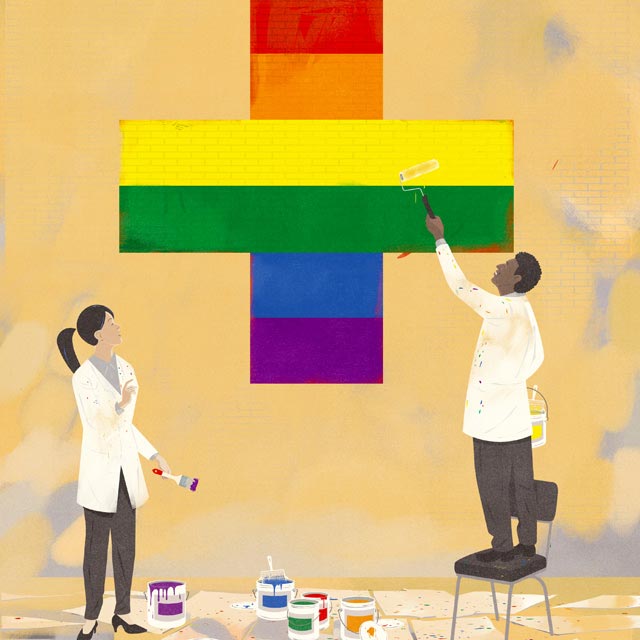 LGBT Americans have experienced and continue to experience health disparities. They are also more likely than other Americans to be uninsured or underinsured. Luckily, we’ve seen a number of major steps taken to help the LGBT gain the rights that others have.

State health insurance companies are now prohibited from discriminating on the basis of a person’s sexual identity or gender orientation. This opens the door for LGBT people to have access to the healthcare they desire.

One of the first things you should be aware of the HIPAA guidelines for LGBT people and more specifically, same-sex couples. Guidelines recently released from HHS clarify that the term “spouse,” as used in the Privacy Rule. It must be interpreted to include individuals who are in a legally valid same-sex marriage sanctioned by a state, territory or foreign jurisdiction. Knowing this is important, especially when it comes to serious health decisions. When treating LGBT patients you want to include them as family when HIPAA allows it.

In some cases, an LGBT couple may have legally given each other power of attorney. This can also give them the ability to make health decisions for his or her loved one.

It’s also important to remember the importance of discretion when treating LGBT patients. While we have seen some strides when it comes to the inclusion of the LGBT community, it’s still a tough situation for many. It might take awhile for them to disclose personal information about sexual history and sexual activity. It’s important to remind them that you’re simply there to help them to the best of your ability.

As the LGBT communities voice continues to grow louder, it’s important that you the tools and resources for treating LGBT patients. If you have other tips for treating patients, feel free to leave a comment below! If you’re looking for an exciting healthcare career, feel free to check out the thousands of jobs we have available.